Watch GSP’s Return to the Octagon at the Bear

Posted on November 7, 2012 in Uncategorized

Back in what UFC President Dana White calls “the fight of his career,” UFC fighter Georges St-Pierre is back on November 17! Burnaby’s Great Bear Pub will be playing the much-anticipated UFC 154 at 7pm.

The match presents GSP and current interim titleholder Carlos Condit in a battle to determine the world’s best 170-pound fighter. St-Pierre, who hasn’t fought in several months after being sidelined by an ACL injury, last defeated Jake Shields at UFC 129. However, Condit claimed the interim title by defeating Nick Diaz in February. The two champions will enter the ring with only one leaving as the undisputed best fighter in the UFC welterweight division.

Also on the UFC 154 card is Johny Hendricks and Martin Kampmann fighting to prove they have an effect on the welterweight title standings. Hendricks is looking to add a fifth consecutive win to his current streak, while Kampmann feels a win over Hendricks will put him at the top of the 170-pound division.

Drop by the Great Bear at 7pm on November 17 to get in on the action, or come by early to watch two full hours of preliminary card action at 5pm! 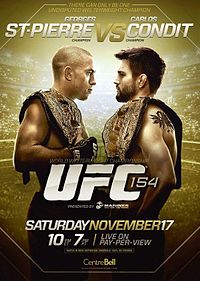